Buildings on the Rampart

When Fredericia was founded in 1650 the whole of the town was surrounded by the rampart and its moat. Access to the town was therefore only admitted through gates. At that time gates were constructed of wood with drawbridges which could be hoisted. On top of the gates stone paved woodbridges were placed. The gates constituted weak points of the fortress so one attempted to construct them as safe and few as possible. The King's Gate which was placed between The Queen´s Bastion and The King´s Bastion  - at the end of Kongensgade – was originally thought as the main gate to the fortress. Apart from this you had access via The Prince's gate and the Queen's Gate. The latter was placed between Holstein's Bastion and Oldenburg's Bastion where the railroad and Holstensvej run today. None of the original gate buildings are preserved to this day. 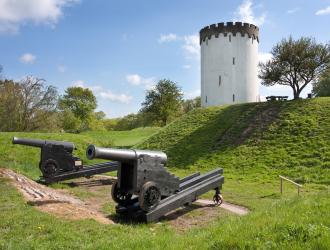 The water Tower at Prince George´s Bastion built by architect O. Gundelach-Petersen in 1908.

The oldest of the existing gate buildings is the Prince's Gate the appearance of which can be dated back to 1753 when the brick-built gate replaced the old oak wood gate. Until 1925 the Prince's Gate was the main entrance of the town despite the fact that this role originally was intended for the King's Gate. The cause of this was among other things that the roads to Vejle and Kolding – the neighbouring towns – started right outside of the Prince's Gate. Around 1920 traffic had grown to such an extent that a solution had to be found to meet the growing need for a passage through the Rampart. Between the Prince's Gate and the King's Gate an old military sally-port had existed.

This was demolished and at almost the same place - between Købmagergade and Dalegade – Nørreport (Northern Gate) was constructed. The gate was drawn by one of the mostly used architects in Fredericia in this period of time O. Gundelach-Petersen, and he also drew Danmarks Port (Denmark's Gate) which was construced to relieve of the pressure on the Prince's Gate (Prinsens Port) in 1925.

In addition to the gates of the Rampart a couple of guard rooms are preserved at the Rampart terrain. The Main Guard (Gammel Hovedvagt) is the oldest. It was built in 1736 as a guard room and prison (stokhus) which has been altered several times subsequently. Apart from the functions as guard building and prison it has accommodated a military hospital. By the King´s Gate another preserved guard room is located. In 1736 another guard room was built at the site. This building both accommodated the military guard and also functioned as an octroy house where goods coming in and out of town were declared. The existing building was built in 1856 and replaced the old building from 1736.

Furthermore there are two more buildings at The Rampart which functioned as magazines for gunpowder and bullets. The oldest of these buildings is the Gunpowder Tower which is Fredericia's oldest preserved military building. The building is situated by Øster Voldgade (East Rampart Street) and was built in 1675. The other preserved gunpowder magazine is situated at The Citadel. Originally there were 16 military buildings placed here but today only the Gunpowder Magazine remains. This was built in 1858 after the original gunpowder magazine was destroyed by the Danish navy during the Prussian occupation of Fredericia in 1848.

On The Rampart there is also one single civil building, namely the white Water Tower at Prince George's Bastion. The Tower was build in 1908 to meet the growing need for water of the town. The Tower was drawn by architect O. Gundelach-Petersen and is designed with embrasures – a design which corresponds to the location in an environment of military history.

Gallery with the Ramparts buildings