Facts about the Fortress

Fredericia Fortress was founded in 1650 as an answer to among other things The Thirty Years` War and the The Dano-Swedish Wars. The Government was aware that it was necessary to strengthen the defence of Denmark. At that time the town planners heeded the idea that town and fortifications was a unity. And therefore it was planned that the foundation and building of the town as a unified whole. Thus Fredericia became one of the very few Danish towns planned and founded as a fortificated town without having an existing town before.

The Ramparts of the Fortress facing land were 1.800 meters long and had 9 bastions. Towards the sea a weaker defence work was constructed - Eastern Rampart (Øster Vold) and Southern Rampart (Sønder Vold). Thus the total perimeter of the Fortress  was 4.600 meters. The Fortification including its moat covered an area of approximately 100 hectares and the area of the town within the Ramparts covered 103 hectares. 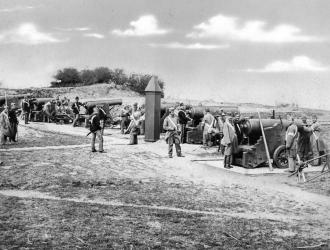 Austrian soldiers at the Citadel, 1864

Commander in Chief Anders Bille  designs a defence strategy which includes a fortification at Bersodde later known as Fredericia.

Nobility from Jutland are given order to produce tools and wheelbarrows which are necessary for the construction work.

King Frederic the 3rd grants the town privileges on the 15th of December – the official anniversary of the town.

The King orders all citizens in Ullerup, Hannerup and Hyby to move their farms and families within the Ramparts.

Fredericia´s coat of arms (the lion with a palm branch and a sword) is found in town hall signet for the first time.

Swedish forces conquer the town on October the 24th and raid it.

The Swedish troops leave the fortification after having burnt or ruined most of it.

The rebuilding of the forticication is completed whereafter it again is left to decay.

During a timespan of 1½ years the fortress was repaired by 5.000 workers as an answer to the threat of The Great Northern War.

The fortess is downgraded and maintenance is discontinued.

During the Napolionic Wars coast batteries were constructed at the citadel and at Oldenborg Bastion.

The Ramparts are penetraded for the first time by the construction of the Old Harbour (Gl. Havn).

The fortress is considered of no military value by the outbreak of 1st Schleswig War.

In only three months Colonel Lunding puts the neglegted fortress in defensible order. 118 pieces of artillery and matching ammunition is transferred from Copenhagen. The fortress is held by Danish forces until the sortie on the 6th of July 1849.

The fortress is reinforced by the alterations of Prince Georg´s, Prince Christian´s and the Queen´s Bastions.

Fredericia is besieged and bombarded during the 2nd Schleswig War. After the Danish defeat at Dybbøl the troops of the fortress are transferred to Funen and the fortress is handed over to the Austrians.

By The Defence Act of 30th of September 1909 the fortress is closed down.

Fredericia Municipalty buys the terrain of the Ramparts but the Citadel remains the property of the army.

The Ramparts are secured for posterity by a preservation regulation. The glacis (the terrain immediately outside of the Ramparts) is released for villas.

Prangervej is led through the Ramparts

The citadel is handed over to the Municipalty.

Fredericia Municipalty buys the Gunpowder Magazine and the Guard Building at Kongens Port (The King's Gate).