War is the very basis for the foundation of Fredericia. Thus the town was established as a fortress in 1650. The 17th Century was characterized by many and long lasting disturbances. The Thirty Year´s War (1618-1648) influenced most of Europe and furthermore at that time there was a strong rivalry between the Danish King Christian the 4th and the Swedish King about supremacy of the Baltic Sea which among other things led to the Swedish occupation of Jutland in the 1640s. Already in the 1630s the King made plans to construct a fortress which could defend Jutland and in 1648 the final location was agreed to when it was decided to use a small fieldwork constructed by the Swedish occupational forces at Bersodde as the centre of the new fortress. This place is today known as the Citadel (Kastellet).

The Battle of Fredericia the 6th of July 1849

The Swedish occupation in the 1640s ended by the defeat of the Danes. The new King Frederic the 3rd was keen on retaliation. The King declared war on Sweden on the 1st of July 1657 but the outcome wasen´t what he had hoped. By the outbreak of the war the Swedish troops who were situated in Poland marched to the Southern border of Denmark and continued up Jutland. The Danish forces situated in Holstein fled up north and found refuge in the fortress, which the first years was called Frederick´s Point (Frederiksodde.). The Swedish who were close upon their heels tried to storm the fortress but unsuccessful to begin with. Then followed a two months lasting siege of the fortress which ended in a successful Swedish storm against the installations on the 24th of October. After a couple of hour`s fighting the Swedish captured the town which they vandalized and plundered the next hours. The Swedish troops then occupied the town. On the 26th of February 1658 the Roskilde peace treaty was signed which – among other things - meant that Denmark lost its possessions on the Swedish Peninsula, Scania, Hallland and Blekinge. But this didn´t mean that the Swedish troops withdrew from the fortress and in August the war burst out again. First in May 1659 the Swedish troops gave up the fortress and left. Before this happened they burnt down and destroyed the town. The final Dano-Swedish peace agreement was brought about on May the 16th 1660.

The Sortie from Fredericia 6th of July 1849.

After the great destruction of the town in the 1650s both the town and the fortress was rebuilt. Nevertheless it was a great task to maintain the fortress so again it decayed and by the outbreak of the 1st Schleswig War in March 1848 it was in a very bad condition. On the 25th of April the Danish were defeated at Schleswig and it was decided to evacuate Jutland. All troops and material were transferred to Funen. The night between May the 2nd and 3rd the Prussian troops occupied Fredericia without resistance. While in town they were fired on by the Danish Marine´s ships from Little Belt but they suffered only minimal damage. However the buildings Proviantgården (Provisions´Store) and Krudtmagasinet (Gun Powder Store) burnt down to the ground. The occupational forces left Fredericia again on the 25th of May after pressure from England and Russia and this meant that The Danish could bring the fortress in a defenceable order which happened before the enemy (the Schleswig-Holstein troops) besieged Fredericia on the 8th of May 1849.

The town was then shot at by the enemy´s artillery and many houses were destroyed. The besieged forces only suffered minimal damage and two newly constructed quays close to the Citadel (Kastellet) opened the opportunity to have the Navy bring troops and materiel to the town. The Schleswig-Holstein forces took the initiative to establish positions by building the so called Trelde Rampards which could cut the naval supply line and bombard the new queys and thereby threaten the Danish positions. This meant that the Danish commander-in-chief decided for an assult. In the days from the 3rd to the 5th of July additional forces were deployed to Fredericia. Thus there were 23.00 Danish soldiers within the fortress out of which 19.000 were ordered to participate in the sortie.

The Danish assult was made from the North side of the fortress and was commenced at one o´clock a.m. the night between the 5th and 6th of July. After fierce fighting to the North and Northwest of the town the Schleswig-Holstein forces were driven away and thus the siege was unblocked. The battle cost the Danes 512 dead and 1344 wounded whereas the Schleswig-Holstein forces suffered 202 dead and 835 wounded. Many of the wounded later died from their injuries. On the 10th of July a ceasefire was agreed to by the Prussians. When the war resumed in 1850 the fightings took pace far to the South and Fredericia didn´t become involved in acts of war again in this war.

The First Schleswig War didn´t solve the Schleswig question which still was urgent. On the 1st of February 1864 57.000 prussian and Austrian troops crossed the river Eider. On the 8th of February Jutland was declared in a state of siege and ten days later the enemy crossed Kongeåen (the river separating North Schleswig from the rest of Jutland). The Prussians encircled Fredericia and on the 20th of March they started a heavy bombardment on the town. 90 buildings were damaged by the assult and especially the quarter to the north of Danmaksgade between Vendersgade and Kongensgade was hard hit. After the fall of Dybbøl on the 18th of April the Danish War Minister issued an order to evacuate the fortress of Fredericia and the Danish troops were deployed to Middelfart (on the island of Funen). On April the 29th  at one p.m. the enemy advanced into Fredericia and occupied the town. They immediately started destroying the fortification. On the 12th of May a ceasefire was agreed on and the civilians of which the major part had taken refuge on Funen gradually started to return to the town. The war restarted at other places than Fredericia and the town didn´t become involved in these acts. Though the Austrian troops occupied the town until the 16th of November neither the town nor the citizens suffered any harm during the occupation.

Next time Fredericia became occupied by hostile forces was during the Second World War. The fortress was shut down at this point but one of the first places which the occupying forces took on the 9th of April 1940 was Fredericia. The Germans immediately occupied the military barracks at Øster Voldgade which became their resort during the next five years. The first years of occupation were relatively calm but from August 1943 there were several protest campaigns such as general strikes and acts of sabotage. Among other things there were a number of railroad sabotage acts in 1944 in the area near Fredericia.

Unlike Dybbøl there were no major battles at Fredericia in 1864, but the signifigance of the fortress in the war against the Prussians and Austrians was not unimportant.
Læs mere 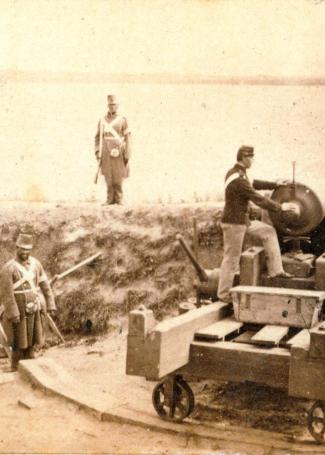