The Sortie from Fredericia on the 6th of July 1849

The sortie from Fredericia took place in the middle of the 1st Schleswig War 1848-1850 (also known as the Three Years War) during which the Schleswig-Holstein army besieged Fredericia. The Prussian Army of 22.000 men commanded by Lieutenant General Prittwitz had followed Major General Rye up Jutland and on the island Als Major General de Meza faced 22.000 troops from the German Confederation.

That a sortie from Fredericia was a possibility at all and if so the character of it wasn't given beforehand. The War Minister C.F.Hansen and other high ranking military characters constantly tried to poke their noses into the affairs of the army command which in April 1849 was put in the hands of the 58 years old Frederic Rubeck Henrik Bulow. First from the 16th of June Bulow was assured the he and he alone decided the tactical decisions of the army and thus his plans of the sortie from Fredericia could be realized. On the 21st of June Major General Christian Julius de Meza departed Als with about 5.000 troops and on the 30th of June Major General Rye sailed from his positions at Helgenæs with about 4.000 men. Both headed for the island Funen to Faaborg and Bogense respectively for then to be deployed by ship from Strib across Little Belt to Fredericia. This happened from the 3rd to the 5th of July. The transportation of troops didn't pass on unobserved. The Prussian General Bonin who was commander in chief of the besieging Schleswig-Holstein army smelled the rat but he underestimated the number of Danish troops within the fortress and didn't imagine that the sortie would take place in the middle of the night.

At a council of war held on the 4th of July at Vejlby parsonage – Bulow's headquarter – the sortie was planned in detail. Among other things it was decided that 19.000 of the now 23.000 troops in total had to participate in the attack. At 9.15 on the 5th of July Bulow sailed from Strib on Funen to the Citadel in Fredericia and then went to Commander Colonel Lunding's residence, Bella Vista in Sjællandsgade. Here the last council of war was held before the sortie. 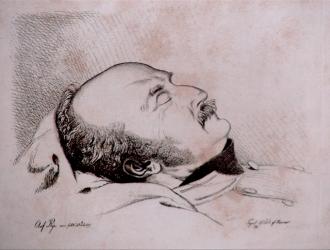 At one o'clock at night/AM on the 6th of July de Meza moved out through King's Gate (Kongens Port) and another sortie port with 5.000 soldiers. The latter port was situated where Northern Port (Nørreport) lies today. The task was to secure the no man's land between the positions of the enemy at Egumvejen and the more Northern position by the coast but this part of the operation didn´t go quite as planned. The dark and the narrow Sortie Gate slowed the progress of the troops so the 1st Battalion which had moved out through the King's Gate with about 1.000 soldiers moved too quickly forward along Treldevej and found themselves isolated in the terrain somewhere between Egeskovvej and Treldevej.

The problem was that the 1st Battalion came under fire from both flanks and at the same time was attacked by auxhiliary troops coming from Stallerup and Kirstinebjerg. From the Sortie Gate had now come three companies from the 2nd Battalion and they moved quickly out in the terrain to find ad support the left flank of 1st Battalion. Unfortunately for the Danes the three companies (2-300 men) went too far to the West thereby missing the left flank of 1st Batalion. At the same time they moved too far North behind the enemy positions at Egumvejen and here they were vigorously rebuffed by the aforementioned auxhiliary troops from Stallerup. The bottleneck at the Sortie Gate continued to create problems and the subsequent Battalion, the 2nd Grenadiers was therefore sent out in the dark towards Northwest without any coordination. The Staff was well aware that the 1st Battalion was in an extremely exposed situation. Therefore there was no other option than forward the troops in the dark as soon as they came out of the Gates and then hope that they managed to find the left flank of the 1st Battalion. Thus five companies found themselves too far to the West. But despite fierce resistance and heavy losses the enemy position was taken and soon Rampard 4 and the Large Mortar Battery was eliminated. From here the companies moved across the cleft to the North to take Rampard 3 where they unexpectedly met fierce resistance from a coordinated counter attack by approximately 2.000 enemy troops.

The rest of the five companies had no other opportunity than to fall back to the previously conquered trenches. Here Major General Friedrich Adolph Schleppegrell had arrived in position with his reserve battalion of 5.000 men who encountered the Schleswig-Holstein troops. There was a short artillery fight across the cleft after which the Danes moved forward with no significant resistance and conquered Rampard 3. Hereafter the Schleswig-Holstein troops retreated/withdrew from this position. The soldiers of the four grenadier companies together with a sole company from 2nd Battalion paved the way by fierce fighting for Schleppegrells further advance. The advance took place in an arch movement to the West and to the South in order to hit the enemy positions at the flank seen from Vejlevej (Rampard 1 and 2) and then further to the South towards Erritsoe.

Major General C.F. Moltke's Brigade was then ordered by Bulow to send a battalion towards the Trelde Rampard. The battalion together with adjacent companies circled the Rampard in and conquered the position which then was held by only four officers and 200 men. At 4 o´clock a.m. the fiercest fightings during the sortie was over. The Danish troops now advanced towards Rands Fjord and further West to Bredstrup. The Schleswig-Holstein troops were now retreating. Schleppegrell could with the aid by two companies sent out by Garrison Commander Colonel Niels Christian Lunding combat the enemy at Rampard 1 and 2 situated by Vejlevej and soon after the remaining enemy positions fell. Moltke's men also joined them and around noon on the 6th of July all the crossings through the Elbo Valley (Elbodalen) were secured by Danish troops.

Retrospectively the narrow Sortie Gate and the general difficult communication in the dark cost many Danish dead soldiers. The total manuevre of the Sortie combined of many partly interventions and these secured the victory of the Danish Army but it was a dear price in terms of casualties. 512 Danish soldiers died on the battlefield and 1344 were wounded and many later died on the hospitals.

The Sortie from Fredericia took place at a critcal point of the war for the Danish army. The army succeeded in forcing the Schleswig-Holstein army back from Fredericia but the war continued with more battles and scuffles between the two armies. Every year the victory of the sortie of the 6th of July is celebrated in Fredericia. On this date homage is paid to the fallen Danish soldiers and especially at the key points such as the sculpture of The Valiant Soldier and the War Memorial.