The nature on the Rampart

Many changes have been made in relation to appearance, nature and function of Fredericia Rampart since it was constructed in the 17th Century. Thus the fortress consists of a 17th Century fortification (the King's and Denmark Bastions) as well as an 18th Century fortification (Holstein, Schleswig and the Princess' Bastions) and a construction from the 1860s (Prince Georg's, Prince Christian's and The Queen's Bastions).

Fredericia Municipalty bought the terrain of the Ramparts in 1914 when the Fortress was closed down and the job of drawing up a sketch  for a town park was put in the hands of landscape architect Erstad Jørgensen. Erstad´s draft above all seeked to preserve the fortifications as intact as possible thereby making the history of it apparent to posterity as possible. 16 kilometers of paths, the necessary staircases and the earth works of the Ramparts were retained on the whole of the 50 ha area which today constitutes the Town Park, the Ramparts. 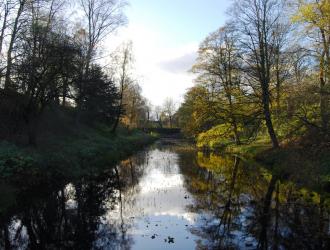 In times of war the Ramparts have been cleared of growth except from grass. At the construction of the Ramparts the turfs were cut from the surrounding areas and fastened to the slopes with wooden spikes. In the 1740s maple trees were planted on the Rampart path and several places it is clear that they were planted according to standard tradition with 16 feet between each tree. The planted maple trees have multiplied themselves all over the Ramparts, so the shifting Rampart attendants have had to put a lot of energy to clear the young plants keeping the slopes free of tree growth.

Maple trees were introduced in Denmark from 1699 to 1746. Presumably maples trees originated from France from where they were used as avenue trees in connection  with the afforestation of the Versaille Park in 1682.

The Moats in front of the bastions were constructed as integrated parts of the defense of the Fortress. To ensure a water depth of 1.8 meters a somewhat deeper channel was cut at the bottom of the moat so that no enemy could wade across the moat – a so called cunette. The flat part between the slopes of the Rampart and the moat  - the draff – was constructed to prevent the Rampart to cave in and fill the moat.

Furthermore the water level was secured by the construction of dikes which sectionalized the moat into reservoirs. In 1849 around Fredericia there were 11 dikes which were used for flooding an extensive area thereby preventing an enemy to make an assult at this place. The whole slope along Ullerup Brook stretching to Madsby Park made up the flooding. At that time the present time park area made up pastures and fields for agriculture. Today the moat is used for fishing among others pikes and for ice skating during winter time.

Hawthorne has always been there at the Ramparts. When the fortress was constructed hawthorne was planted at the draff between the inner slopes of the Rampart and the moat. Hawthorne was the barbed wire of that time so that any enemy crossing the moat first had to force the thicket to get further up the rampart. To maintain this hawthorne plantation a Thorne Master was appointed who had the job of weaving the hawthorne branches into an impenetrable network and to cut down the hawthorne. The thicket had to stand at approximately one meters height so that you still had a general view from the top of the rampart.

Today hawthorne has sown itself everywhere on the rampart and in May you can enjoy its beauty in full bloom.