Contrary to what happened Dybbøl there were no great military battles at Fredericia in 1864 but the role of the fortress in the war against Prussia and Austria wasn´t insignificant.

Shortly before the outbreak of the war on the 1st of February General Lunding was appointed commanding officer of Fredericia and had orders to put the fortress in defensible state. In 1849 Lunding had done the same and on the 6th of July 1849 the Danish troops defeated the Schleswig- Holstein army in the sortie (outbreak) from the town. In 1864 the moat surrounding the  rampards were in such a poor condition that Lunding recommended it neglected. But he had orders to immediately commence reconditioning the moat and during the next month over 1000 workers struggled to make the fortress ready. As reinforcement Lunding was given one third of the of the troops who on February the 5th  were withdrawn from Dannevirke.

The Prussian and Austrian troops first occupied Kolding and from there they advanced in the direction of  Fredericia in the beginning of March. On the 8th of March there were (outpost) skirmishs and about 200 Danish soldiers were taken prisoners in an ambush between Snoghøj and Damgaard.

The Austrian forces constructed five artillery batteries outside the town and these were used on March the 20th to 22nd for a heavy bombardment. The batteries were out of reach of the Danish artillery and the heavy fire was only answered to a limited extent – about 150 rounds compared to the Austrians´ 2900. During a break in the firing Field Marchall Wrangel offered General Lunding an honourable surrender which Lunding refused.

Very little damage was done to the Rampards but in the quarter between Vendersgade and Kongensgade about 100 buildings were damaged and 36 burnt down to the ground. As it turned out the bombardment was an attempt to attract the Danish forces to Fredericia by withdrawing troops from Dybbøl which the Austrian-Prussian had decided to attack later. 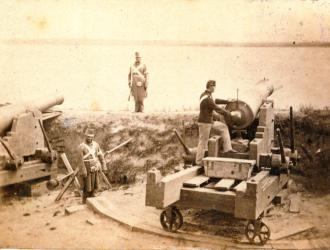 Austrian soldiers at Oldenborgs Bastion with the canons turned towards Little Belt and Funen. The picture is kindly borrowed from The Danish Central Library in South Schleswig (Dansk Centralbibliotek for Sydslesvig)

The Fortress is abandoned

After the Danish defeat at Dybbøl on the 18th of April both War Minister Lundbye and Commander in Chief Gerlach intended to prevent further loss of soldiers and materiel as much as possible and prevent the advance of the enemy at the same time. Gerlach thought this was done best by holding Fredericia but Lundbye doubted. He was afraid that the whole Danish army would be wiped out. After having changed opinion several times during a meeting of the Ministers of State and the Prime Minister and the King Lundbye issued an order to evacuate Fredericia.

When general Lunding recieved the order he immediately requested a telegraph conversation with the War Minister. In this he expressed astonishment that the decision was made and tried to create freedom of action by requesting permission for his troops to defend themselves if attacked during the withdrawal.

For the troops in Fredericia the order created disbelief and was strongly demoralizing. They would rather “be slaughtered than [..] have to be withdrawn in this way”. Lunding himself wrote in a letter to his wife, “It was to drain a cup of bitterness to the dregs.”

In deep secrecy the fortress was abandoned between the 26th to 28th of April and when the Austrian troops realized this the day after they occupied the town. They had made plans to evade Fredericia and instead attack the island of Funen but because of the evacuation this was not necessary. In the reports form the Prussian Staff  you could later read that they considered Fredericia for such a stronghold that they at the conference table would have accepted a withdrawal under much more favorable conditions than it turned out to be the case. Among other things the enemy would have promised not to destroy the fortress and render it undisturbed after a possible truce. Instead big parts of the rampards were blown to pieces and 200 Danish artillery pieces turned against the island of Funen.

The Austrians stayed in Fredericia until the 16th of  November on which date the Peace treaty [was a reality/conclusion of peace became a reality]. The Austrian troops were popular in the town among other things because they showed great respect for the sculpture of The Valiant Soldier which a few years before had been erected in memory of the sortie (outbreak) from Fredericia in 1849. Thus they took part in the 6th of July celebrations together with the citizens of the town.

1864 marked the beginning of the end for Fredericia as a fortified town. Firstly the German Confederation had with the new boundary demarcation by Kongeåen got access to Little Belt and secondly banks of earth (rampards) had become obsolete as a defensive construction due to the enlarged reach and precision of the new artillery. Already in 1866 the penetration of the rampards by the railroad became a reaity and the fortress was finally abolished  in 1909.

As one of the outstanding characters in Fredericia in 1864 one can note that Wrangel was commander –in-chief for the joint Prussian-Austrian army. One of his forfathers had participated in occupying the town during the Dano-Sweedish Wars and he himself participated when the fortress was occupied in 1848. Wrangel who was 80 years old was partly senile and he wasn´t  sympathetic among the other  officers/his staff. Thus the Prussian Crown Prince described it in his diary :

“ Wrangel was as intoxicated by joy, [..]  and during the whole campaign wished for this triumph. In fact he didn´t do anything but babble nonsense whereby the Austrian generals loudly made laughing-stocks of him. Thus he demanded that when during dinners toasts were made he would exclaim that one of the bastions of the fortress be blown up”.

Later Wrangel ordered the statue of The Valiant Soldier to be dismanteled and sent to Berlin for remelting but this was prevented by the Crown Prince.