Description and Background
On the occasion of the 300 years aniversary of the town in 1950 the Reformed Congregation erected a memorial column where Dronningensgade and Sjællandsgade cross each other. It had been erected in memory of and as a thanksgiving of the refuge which the French Reformed, the Huguenots, had found in the town 230 years earlier. The Obelisk had been made of a framework of wood covered with hardboard painted like granite.

The local newspaper, Fredericia Dagblad, made an invitation to have a proper granite obelisk be erected which could be permanent. The Reformed Congregation thought this a brilliant idea and the project was started. The new obelisk was erected outside of the then Fredericia Gymnasium (Fredericia Upper Secondary School) outside of Nørre Port (The Northern Gate). The obelisk is 18 meters high and is carved in granite from the Danish island Bornholm. On the northern and southern sides there are caved French lilies above the inscriptions and on the other sides Huguenot Crosses. Apart from this on the southern side there is a hand with a heart – the seal of the Calvinists. 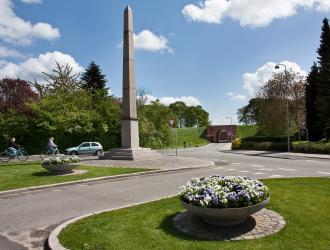 Signum calvini (The seal of Calvin)

In the year of 1719 the first French reformed colonists/newcomers came to Fredericia. They came from Pfalz and Brandenburg where their forefathers for a number of years had lived in exile far from the native soil in France and Belgium.

Innumerable persecutions and sufferings have they experienced because of their religious conviction and threats of becoming gallery slaves or of being burned. In Fredericia the Danish State gave them a safe haven.

They came as horticulurists and tobacco growers and they were given 220 horticulture plots. They were hard-working and thrifty. One can mention families like Armand (Hermann), Bottelet, Le Blond, Deleuran; Desmarets, Devantier, Dufresne, Dupont, Fournaise, Honore, Lefevre, Le Pierre (Stein), Louison, Vilain and many others.